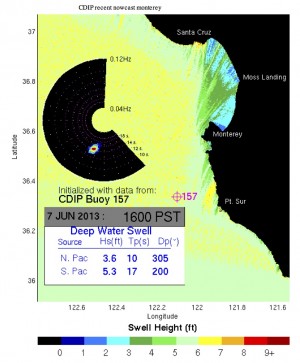 Pretty much as predicted, the internet swell showed up yesterday, June 6, 2013. Surfed Tiburones shoulder high and a little bigger. It was sunny but the wind was blowing. Almost everyone showed up and the pack was pretty brutal. That said, I got a couple of good ones and bailed while the bailing was good. Today, the internet swell really pulled in. The wave charts tell the story – 5-foot and over Hawaiian style – meaning 10-foot plus faces – all day. It was a circus at the Point. This morning the tide was low and the Drain Pipe was tube dredging barrels. I heard it was 40 percent makable with sand-weighted caverns eating rippers alive. But ripping. Over 200+ out along the point alone. I surfed later in the afternoon. There was a stiff breeze, but conditions were good – and so was the tide. I Paddled out to Tiburones in between sets, so I really didn’t know what to expect. There was a lot of water moving around, so paddling was required to stay in position. A couple of middle waves came through - showing at a little overhead – and suggesting the sets were bigger. Up toward second peak bombs were exploding off the reef and rippers were taking it apart. And all the other internet squatters were wreaking havoc – boards flying all over – tomb-stoning in unison until it looked like a whole graveyard. Chaos was part of it. My first wave was a middle one – pretty good shape – took off and found my cord wrapped around the big toe of my front foot while my back foot perched on the rest of my cord. I estimate only about two-thirds of each foot was in touch with the board – couldn’t move my feet – and I was restricted to the last third of my board – the front of my board was bouncing weightlessly. It wasn’t the best start, but I made it to the end of the wave and rode over the back. Things definitely improved from there. Somehow I was able to negotiate the crowd and found some gems. My last wave was an outside bomb that walled all the way past the stairs at Privates – whereupon I straightened out and rode the white water to shore. I walked back and sat at the Steps watching serious sets and serious rippers. Can’t bag on this internet swell too much – it was the real deal. 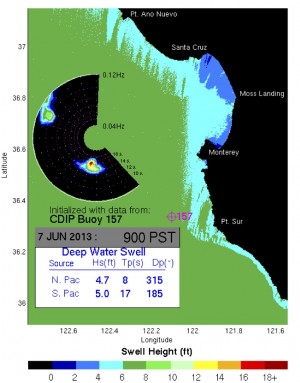