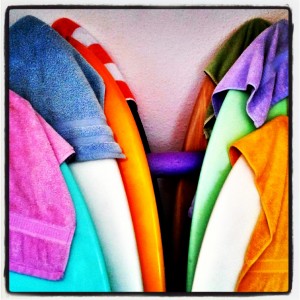 Today marks 7 days of continuous south swell. Sore but motivated, I surfed Tiburones in the rain. During this span of good surf I went back into the board rotation – each board provided some fun – and further understanding as to why it was left out of the rotation in the first place. Is it time for another new board? Or is it just me? (probably me) – Pictures: assorted views since my last post – no questions asked.

May 20, 2013 – south swell started up couple days ago – small at 20 seconds from 200 degrees. Now, the buoys show 2.8 feet from 200 at 17 seconds. Surfed the first day on the LB at Tiburones and SB; surfed yesterday at Tiburones on the quad. Before the swell marched in, we were hanging on various wind swell nibbles and sliver-like windows. Have to say that it all came together yesterday. It was Sunday (i.e., heavily packed), hot and sunny, light breeze that never blew in the wrong direction, 3 to 15 wave sets, moderate tides, and 50 percent closeout ratio. Don’t know how the evening session was, but given conditions at sunset – it may have been….The swell is supposed to hang for awhile – we shall see.

An article I came across opened with “Why has income inequality been rising in advanced economies — it’s not just the US, people — over the past few decades? The economic consensus mostly explains the phenomenon as a race between accelerating technological change and expanding education.” So, the article goes on to try and explain that income inequality is a result of technology and lack of education that is focused on technology and paced with the speed of technological change. Really? So, incomes have been flat since the late 1970’s, productivity has been exponentially increasing, and pay for management and CEOs has gone through the roof. Consider this: The average CEO of a big American company makes more in an hour than his or her average employee makes in a month. And, America is rapidly becoming a country of a few million overlords and three hundred million serfs. The point – it’s not really about technology – it’s about greed. The corporate pie is not sliced in a way that enriches and benefits all parties of the transaction fairly. Add in a little union busting, “right-to-work” states, and an oppressing unemployment rate, and those in charge will continue to have conditions under which they can squeeze more profit and shareholder equity from those who make the whole organization and system work. Back to the overlords and serfs – When inequality gets bad enough, serfs don’t have much money to buy products from overlords. This hurts the overlords’ ability to get even richer. That’s what’s wrong with the American economy right now. The serfs are tapped out. The overlords are responding by firing more serfs, to increase profits. Unfortunately, because one person’s “costs” are another person’s “wages,” this is making the problem worse. How to make it right? Persuade the overlords that it is in their best interests to share more of their wealth by paying their employees more for their hard work (work that, not incidentally, is what makes the overlords rich).

The Grant Study is one of the longest-running longitudinal studies of human development. The project, which began in 1938, has followed 268 Harvard undergraduate men for 75 years, measuring an astonishing range of psychological, anthropological, and physical traits—from personality type to IQ to drinking habits to family relationships to “hanging length of his scrotum”—in an effort to determine what factors contribute most strongly to human flourishing.

There was no significant difference in maximum income earned by men with IQs in the 110–115 range and men with IQs higher than 150. Political ideology had no bearing on life satisfaction—but the most-conservative men ceased sexual relations at an average age of 68, while the most-liberal men had active sex lives into their 80s. Most important is the powerful correlation between the warmth of your relationships and your health and happiness in old age. The author’s key takeaway, in his own words: “The seventy-five years and twenty million dollars expended on the Grant Study points … to a straightforward five-word conclusion: ‘Happiness is love. Full stop.’ ”

March 20, 2013 – south swell filled in today under the cover of overcast storm clouds and northwest wind. Still, plenty good. Tiburones had some decent shape, but didn’t top shoulder-high. What was great was that the Internet pack was not on it, and the crew felt warm and cuddly doing something else. The lineup was relatively free and easy. Yes – it was cold, but satisfying. Great start to spring.

March 1, 2013 – first legit south swell is showing on the buoys. The south numbers are 2.2 feet at 17 seconds from 185. Also, a west-northwest swell is barely showing on the radar this evening – 8 feet at 20 seconds from 300. Tomorrow, the masses expect a strong Internet swell – they may be rewarded.

Surfed the Steps today – solid west-northwest long period swell – high tide and draining way fast. Anyway, the talent level and competition was high, and I started my session struggling. You know, you want to get that first wave and build some confidence – I was losing confidence quickly paddling, maneuvering – but nada. Then I hooked into one and got two turns before the wave closed out – wasn’t much, but I remained hopeful. Finally, it seemed a good in-betweener was coming my way and I thought I was uncontested. Oh no – one of the stud kids spun around and was looking to paddle over and get it – but, it was one of the youth with soul. He looked over – saw I was paddling – and encouraged me to go. Definitely the best wave of the session for me – wave and gesture. Thank you Kane – you are a true surfer.

Medicine for profit? How does it work? Profit off fear and vanity. It’s an unfortunate truth. There’s not much profit for drug companies in producing new and better medicines for people that can’t really pay for them. Diseases suffered by the wealthy, like heart disease and cosmetic treatments like those for baldness will always command a higher price. Often, there are no morals in profit – especially in the corporate world where the functionaries are insulated from the effects– very zombie like. No translate into health care – dude, seriously.